In 1980 The Brave New Wave band was hired to become Jeff St John’s backing group and was imaginatively relabelled THE KIM HUMPHREYS BAND.

Blindly following the blueprint of all things late 70’s rock, my trusty ’68 Les Paul was at this juncture accompanied by the obligatory Marshall stack and the Stratocaster I had used on the Brave New Wave sessions, now butchered beyond recognition and sporting Van Halen inspired livery! Add to this every brightly coloured little metal box dispensed by Boss and MXR, a guitar Synth and tape echo, not forgetting the EMG pick ups! The things we do!

Drummer Jeff Cripps soon thereafter fell into disfavour with Jeff St John after showing up to a gig with Jeff St Cripps emblazed across his bass drum skin. This light hearted prank was not taken kindly to by our employer and ex pat Kiwi, Kevin Toneycliffe was brought in as Jeff St Cripp’s replacement.

I also dropped all the bling and reverted back to a basic set up, Les Paul, Marshall head and one cab. I also found new respect for players that managed to get great sounds using all of that stuff.

We played predominantly original material, loud and raucous, indentified as a cross between ZZ Top and Dr Feelgood, which quickly found favour with the biker crowd.

We became extremely popular in the Wollongong area pulling crowds of 1500 plus and outdrawing the likes of  MENTAL AS ANYTHING and THE DIVYNYLS.

Our self titled album was produced by SHERBET lead guitarist CLIVE SHAKESPEARE at his 16 track Silverwood Studio, located in the basement of his sumptuous home on Sydney’s’ leafy North Shore, gold and platinum records adorning the studio toilet  walls, indicating one sure way to pay off a mortgage!

EMI was quite taken aback when I told them my idea was to have a 12″ single as the A Side at 45 rpm and the album tracks on the flip, running at 33rpm. This was definitely the most memorable feature of the record!

It’s a time worn cliché when a band says its studio efforts fail to capture the energy of  live performances, but we and many of our followers thought the GREAT DANE album fell into that category .

On the strength of our popularity in the live arena, our single SHE WONT GO did get some commercial airplay but this would rightfully have done no more than having the uninitiated wondering what the fuss, if any, was about. 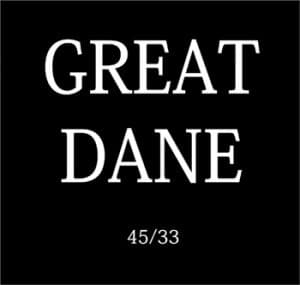 My disappointment at the time was highlighted by the fact that I did not  keep a copy of the album. I was fortunate to find a copy and borrow it to lift the tracks for this anthology.

Three decades later, I have changed my opinion, to some degree. I was surprised that I actually liked a lot of what I was hearing. The guitars tones are fat and ballsy (Thanks Clive!) my playing a perfect snapshot of where my head was at in the early 80’s, the band it tight and the song writing shows glimpses of promise.

In hindsight I am glad that I had ditched my effects rack prior to undertaking the recording of the album. Nothing beats a good old American guitar plugged straight into a good old British  amp!

I did take umbrage at one review of the album which referred to us as a poor man’s TMG. Given that HOT COTTAGE had supplied the blueprint for the sound of TMG (and several other very popular groups bands which followed in our wake) I found being criticised for playing my own natural style an insult. In retrospect, I should have taken it as backhanded compliment! 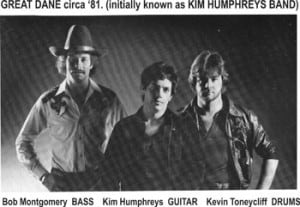 An unexpected bonus was  K TEL picking up a track for its MASTERS OF METAL compilation, which went to NUMBER ONE in Australia and the UK. On the coat tails of name bands on the album, which included BLACK SABBATH, KISS  and VAN HALEN, I earned some very healthy writing royalties!  Hello my dream car, a Lotus.

Whilst this album had placed us in the most exalted company, there were no new doors opened for us, GREAT DANE was considered to be no more than a filler track band and our contribution was dropped for later pressings.

In 83 ‘ I was forced to close shop on the Dane. We had run ourselves into huge debt and I was forced  to sell the band truck, PA and my prized Lotus to satisfy creditors.

Our road crew fared far better, being snapped up by INXS!

This decision was accelerated by an offer to move from Sydney to Melbourne to take up the position of camera director on the Phillip Adams produced animation feature ABRACADABRA, a pioneering venture into the world of red and green sunglasses 3D. The lead character in the film was voiced by John Farnham who years before had used PAPER GRAPE as his Sydney backing band.

Not a wise move on the part of Mr. Farnham’s, or our own management as Raindrops Keep Falling On My Head and Sadie The Cleaning Lady were subjected to a Brit Blues makeover!

With all of my musical equipment now sold off, the sole the exception being my Les Paul, which went into storage, my move to Melbourne signalled the beginning of a two year hiatus from music, my work on ABRACADABRA completely time consuming.

On completion of the film I briefly joined the backing group for Neil Diamond clone, PATRICK McMAHON, recently arrived in Melbourne from Perth. After a month of gigs that weren’t at all well received, the guitar went back into storage and I returned north to take up the camera directing gig at Hanna Barbera’s Sydney studio.

No shows booked at the moment.